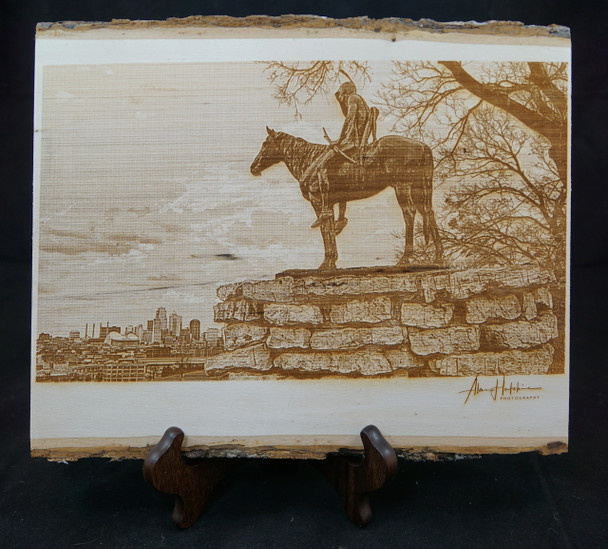 The Scout statue is located in Penn Valley Park in Kansas City, MO. The statue was designed by Cyrus E. Dallin and was dedicated in 1922 as a memorial to local Indian tribes.

Originally made for the the Panama Pacific Exposition in San Francisco in 1915 where it won a Gold Medal the statue first came to Kansas City as part of a temporary exhibit. Local citizens liked it so much they raised $15,000 to purchase the statue.

The statue features a Sioux scout on horseback and is set on a hill overlooking downtown Kansas City, MO. and has become a symbol and mascot of Kansas City.

This engraving features a photo of the statue overlooking the Kansas City Skyline and has been laser engraved on a basswood live-edge plaque. This piece measures about 13 inches wide and 12 inches tall and is about 3/4 inch thick.  It can be displayed using a small easel or could be hung from a wall (hanger is not included).

Your Photo Engraved on Leather

MSRP:
Now: $25.00
Was:
Your photo custom engraved on high quality leather.  Leather is an outstanding material for laser engraving photos. It allows amazing detail to be engraved and is perfect for wedding photos,...

MSRP:
Now: $15.00
Was:
This 5" x 7" synthetic leather blank has been custom laser engraved with a beautiful photo of a German Shepherd dog. This piece is ready to frame and would make a great gift for any German Shepherd...

MSRP: $39.95
Now: $10.00
Was:
Your photo engraved on a piece of 3mm (1/8 inch) Birch Plywood.  This wood allows incredible detail for engraving your favorite photo. Custom laser engraved photos make a special and lasting...

MSRP:
Now: $30.00
Was:
A photo of a large Bison, or Buffalo as they are commonly called, laser engraved on a rectangular Basswood bark plaque. This photo was taken at Maxwell Wildlife Refuge in McPherson County,...

Coffee I Need...Or Kill You I Will 14 Ounce Laser Engraved Latte Mug

MSRP:
Now: $15.00
Was:
Coffee I Need...Or Kill You I will Laser Engraved 14 ounce Latte Mug with lid. These 14 ounce ceramic Latte Mugs are available in several different colors and can be customized if desired. As with...