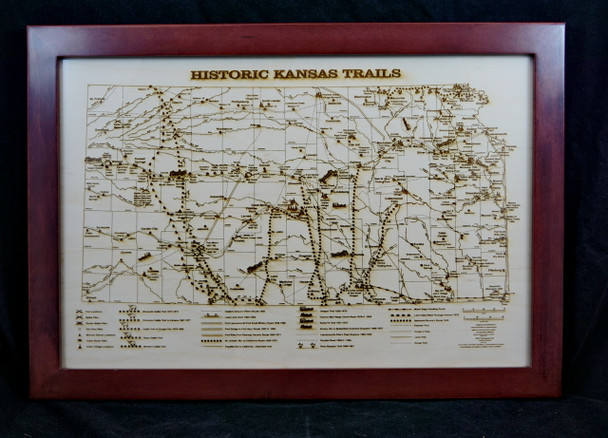 From its early days as a territory through it’s infancy as a state Kansas was at the center of many historical events. Sometimes referred to as "Bloody Kansas" the state was founded in the turmoil that led to the Civil War and had several significant battles and events throughout it's early history. Once the war was over Kansas became the center of the “Wild West” as Cowtowns like Abilene, Caldwell, Wichita, Ellsworth and Dodge City became the shipping point for thousands of head of cattle that were driven up from Texas on the Chisholm and Western Cattle Trails among others.

Using a map created by the Kansas Department of Transportation as the basis, this Historic Trails of Kansas Map shows the routes of these important trails and locations of some key historical events. The map was converted and then laser engraved on birch plywood and framed, making a great decorative piece for any lover of Kansas History. The highly detailed map measures 12” x 18” and comes either ready to hang or unframed if desired. The map could also be engraved on leather if desired for an additional cost.

Please note that color and style of frame might vary slightly depending on availability.

MSRP:
Now: $5.00
Was:
Owl Laser Engraved Solid Wood Keychain These custom engraved wooden keychains are made from solid Alder wood and can be customized for you. Made from 1/8" solid Alder this keychain features an...

MSRP:
Now: $30.00
Was:
Black Marble Paperweight or Memorial Marker. These 3" x 5" Black marble pieces are 3/4" thick and have a chisel edge. They make great paper weights, awards or small memorial markers. We can...

MSRP:
Now: $23.00
Was:
This Laser Engraved Stainless Steel 30 ounce Tumbler has the Bible Verse Hebrews 6:19-20 as well as an Anchor to remind us daily of the steadfast hope that we have in Jesus Christ. This cup is great...

MSRP:
Now: $18.00
Was:
This 12" x 4" Ceramic Tile has been laser engraved with a photo of the downtown Kansas City, Missouri skyline as seen from Liberty Memorial.

Coffee I Need...Or Kill You I Will 14 Ounce Laser Engraved Latte Mug

MSRP:
Now: $15.00
Was:
Coffee I Need...Or Kill You I will Laser Engraved 14 ounce Latte Mug with lid. These 14 ounce ceramic Latte Mugs are available in several different colors and can be customized if desired. As with...

MSRP:
Now: $35.00
Was:
These custom laser engraved synthetic leather Bible covers are available in two different sizes and several different colors. They feature a zipper enclosure and handle and can be custom...

Your Photo Engraved on Leather

MSRP:
Now: $25.00
Was:
Your photo custom engraved on high quality leather.  Leather is an outstanding material for laser engraving photos. It allows amazing detail to be engraved and is perfect for wedding photos,...

MSRP:
Now: $14.00
Was:
English is Weird 11 ounce ceramic coffee mug. This design features a funny saying highlighting a few or the peculiarities of the English Language.  These high quality round ceramic coffee...

MSRP:
Now: $18.00
Was:
Don't Worry I'm a Nurse This 20 ounce Members Mark Blue, Vacuum Insulated, Stainless Steel Tumbler has been laser engraved with this "Nurse" saying making it the perfect gift for any nurse. We have...