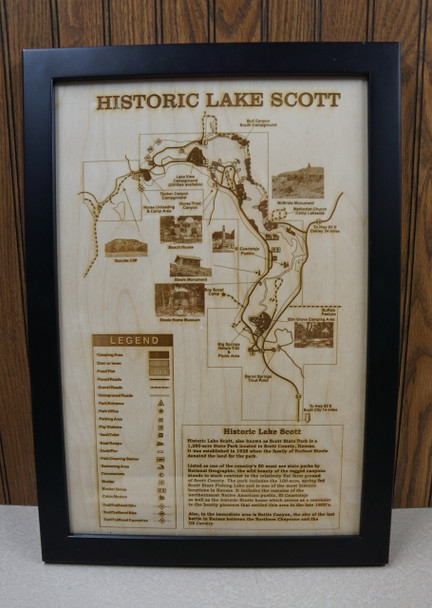 The park was established in 1928 when the family of Herbert Steele donated the land for the Park.  Mr. Steele and his wife homesteaded in the area in the late 1800's and their house has been preserved as a museum to the hearty pioneers that settled this area of Western Kansas.

Scott State Park has been recognized by National Geographic as one of the country's 50 "Must See" state parks.  The wild beauty and rugged canyons that surround the park stand in stark contrast to the relatively flat farm ground of Scott County. The park features the 100-acre spring fed, Scott State Fishing Lake and is one of the most historic locations in Kansas. It included numerous archeological sites including the remains of the northernmost Native American Pueblo known as El Cuartelejo or El Quartelejo.

Also in the area immediately south of the State Park is Battle Canyon which is the site of the last battle in Kansas between the Northern Cheyenne and the US Cavalry.  Other area attractions include Monument Rocks, the Scott County Historical Museum and Jerry Thomas Art Gallery.

This laser engraved map of Historic Scott County Lake features photos from different landmarks in the park and would make a great decoration for the home or office of anyone whose loves this unique place in Kansas.

Please note that color and style of frame might vary slightly depending on availability.

MSRP:
Now: $10.00
Was:
Laser engraved Sunflower on a Ceramic Tile. These high quality ceramic tiles are painted yellow and then laser engraved with an image of a sunflower. They make great gifts for any Sunflower Lover...

MSRP:
Now: $5.00
Was:
Owl Laser Engraved Solid Wood Keychain These custom engraved wooden keychains are made from solid Alder wood and can be customized for you. Made from 1/8" solid Alder this keychain features an...

MSRP:
Now: $30.00
Was:
Black Marble Paperweight or Memorial Marker. These 3" x 5" Black marble pieces are 3/4" thick and have a chisel edge. They make great paper weights, awards or small memorial markers. We can...

MSRP:
Now: $5.00
Was:
We can custom engrave a unique and special Christmas Ornament especially for you! These ornaments are made out of 1/8" thick Alder wood and can be personalized with a graphic, name and year if...

I Survived the 2017 Eclipse

MSRP:
Now: $6.00
Was:
This unique product is made to celebrate the 2017 Total Eclipse. It is 4x6 inches and comes framed and ready to be displayed.  This is engraved on engraved on synthetic leather but the...

MSRP:
Now: $5.00
Was:
Eiffel Tower Laser Engraved Wood Keychain These custom engraved wooden keychains are made from solid Alder wood and can be customized for you. Made from 1/8" solid Alder this "Eiffel...

MSRP:
Now: $5.00
Was:
I Love my Scottie Laser Engraved Wooden Keychain These custom engraved wooden keychains are made from solid Alder wood and can be customized for you. Made from 1/8" solid Alder this "I Love my...

MSRP:
Now: $4.00
Was:
These unique wooden magnets are 4.5" by 2.25" and are made out of 1/8" Birch Plywood. They are available with a magnet glued on the back or could be made without the magnet so they can be displayed...

MSRP:
Now: $15.00
Was:
Wangry Laser Engraved Canvas Wall Art Perfect for the Wine lover this funny dictionary definition has been laser engraved on a stretched canvas and can be hung on the wall or displayed on a small...